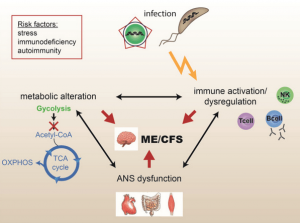 European researchers have examined the evidence that ME may be an autoimmune disease, stating “disease onset is often reported to be triggered by infections and the link between infections and autoimmune diseases is well established”. A group of German scientists tested this theory, using a process called immunoadsorption to remove antibodies in 10 people with ME.