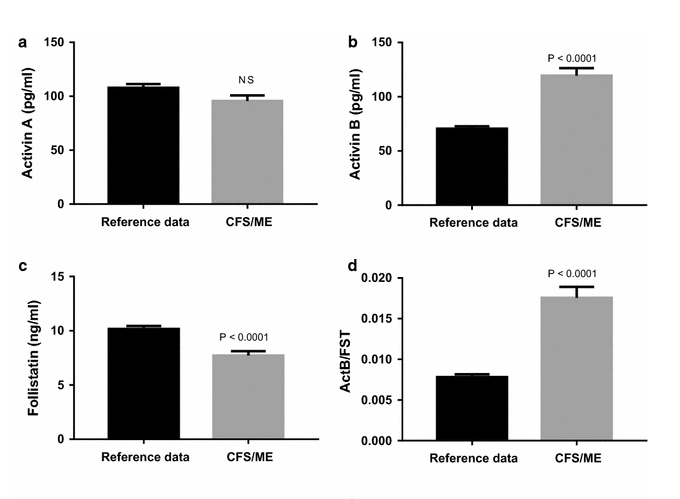 Scientists in Canberra and Melbourne have just published a study finding activin B is a biomarker for myalgic encephalomyelitis/chronic fatigue syndrome (MECFS) using the Canadian Consensus Criteria.

“Elevated activin B levels together with normal activin A levels identified patients with the diagnostic symptoms of CFS/ME, thus providing a novel serum based test.”

The test is patented and only specialised labs would be able to do the test in the short term whilst it is being validated. Hopefully, eventually the assay can be adapted to an immunoassay platform used routinely in pathology labs, when it has been validated in different populations and ethnicities, according to the paper’s lead author, Dr Brett Lidbury of the Australian National University. The test was patented by Paranta Bioscience.

The study ‘Activin B is a novel biomarker for chronic fatigue syndrome/myalgic encephalomyelitis (CFS/ME) diagnosis: a cross sectional study‘ was published in The Journal of Translational Medicine.  Dr Lidbury was featured in ‘Meet the Researchers‘ last year and nominated as ACT’s Scientist of the Year in 2016.

Why study activen?
Dr Lidbury said it was serendipity that led them to look at activin.

“A chance encounter, via Christine Hunter, with Prof David de Kretser of Monash Uni and the Hudson Institute in Clayton, Victoria, led us to examine activin,” he said.

The study explained the activin family are involved in the control of inflammation and muscle mass.

“The activins have multiple physiological roles and capture the diverse array of symptoms experienced by CFS/ME patients.”

Hedger and de Kretser describe activins as “regulators of cell development and function, including cells of the myeloid and lymphoid lineages. Clinical and animal studies have shown that activin levels increase in both acute and chronic inflammation, and are frequently indicators of disease severity. Moreover, inhibition of activin action can reduce inflammation, damage, fibrosis and morbidity/mortality in various disease models.”

De Kretser’s study showed that in patients admitted to intensive care units (ICU) with acute respiratory distress, survival of up to 12-months post ICU can be predicted by the measurement of activin A and B levels during the first 5 days in ICU.

The paper states it “may be a causal relationship, since increased activin A and activin B levels can induce a loss of muscle mass”.

“In addition to immune dysregulation, the loss of muscle mass suggests that the activins are potentially involved in the pathogenesis of CFS/ME, given the prominence of muscle weakness and pain as diagnostic criteria across the various case definitions.

“Activin B levels do not change with respect to age, sex, BMI, ethnicity, smoking, allergies or type of medication and to date, activin B levels have not been reported to be elevated or reduced in other diseases.”

The study noted that other biomarkers exist but are difficult to collect or have other challenges. For example, interleukin 10 (IL-10) which requires spinal fluid samples.

“Transforming growth factor-beta (TGF-β) likewise has been mentioned as a significant marker. [However it needs] special blood collection methods and the removal of platelets prior to assay.”

Trial participants
The scientists studied 40 females and five males, aged 19–66 years and a length of illness from two to 40 years, who met the Canadian Consensus Criteria. They were recruited from Melbourne’s CFS Discovery Clinic. There were 13 female and four male healthy controls, who were not a relative of or lived with a patient.

Blood samples were collected from people after the 20 minute standing test and the concentrations of activin A, activin B and follistatin were measured in the serum isolated from these samples.

Data sharing
Dr Lidbury said the big thing is to validate the research.

“I hope that other labs around the world will have a look at the data, time will tell.”

Next step
The next step is a longitudinal study, which has already begun. The study will examine 80 participants meeting the criteria as well as a control group and a fatigued (but not meeting the CCC) group. The scientists are currently recruiting controls.

“As we speak, we are undertaking a study generously funded by the Mason Foundation which will look deeper to validate and firm up our initial observations,” said Dr Lidbury.

“It is a longitudinal study with patients visiting for an initial consultation, then at six and 12 months after.”

“It is estimated that around 0.4% of people world-wide suffer from CFS/ME and the Centres for Disease Control and Prevention in the USA has declared it a priority disease, along with TB and AIDS. With the majority of affected patients not receiving the correct diagnosis, and therefore never receiving the proper medical care for their illness, there is a pressing need for a diagnostic biomarker to assist these patients.”

From ‘Activin B is a novel biomarker for chronic fatigue syndrome/myalgic encephalomyelitis (CFS/ME) diagnosis: a cross sectional study‘