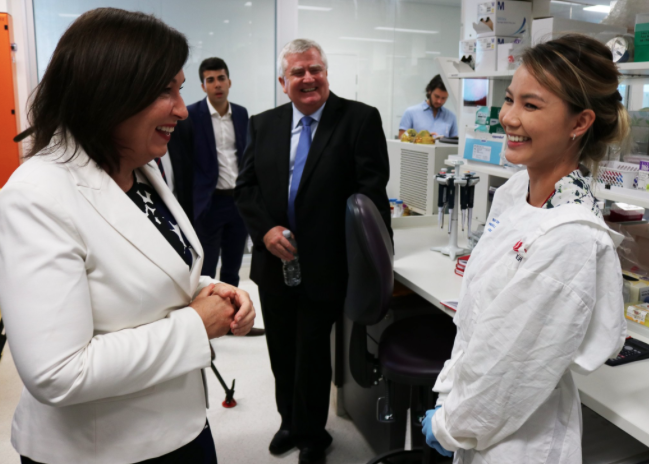 Queensland’s Griffith University is home to the National Centre for Neuroimmunology and Emerging Diseases (NCNED), one of the leading centres for research in ME and chronic fatigue syndrome.  They’ve been in the news lately for their patented biomarker discovery on calcium channel ion defects in patients.

The words ‘breakthrough’ and ‘finally’ have been bandied about for decades. For example, here’s a 1990 article from the New York Times ‘Chronic Fatigue Syndrome Finally Gets Some Respect‘. What does this latest research news mean for Australians and globally?

The class of receptors TRPM3 belongs to are known as ‘threat receptors’, because they’re upregulated when the body is under any kind of threat, such as infection, trauma or even childbirth.(source)

The hypothesis is that upregulation causes the faulty genetic receptors to get over-expressed and then take over, messing up the calcium transfer in a range of cells.

15 people meeting the Fukuda criteria for chronic fatigue syndrome were studied, against 25 controls. The paper is complex to understand, so this article relies on NCNED’s explanations.

NCNED’s Prof Staines told Huffington Post there’s “a defect in the receptor meaning they no longer function the way they should. What the receptors should do is to be able to transfer calcium from outside the cell to the inside.”

The discovery of abnormal calcium immune system cells affects people with CFS in three main areas of the body where CFS-related pain usually occurs — the brain and spinal cord, the pancreas and the stomach.

“This is incredibly important because calcium is required for a huge range of functions within the cell, in every tissue, in every organ system in the body,” Prof Staines told Seven and Nine News on the Gold Coast.

What does it mean for patients?
This means researchers now have a target for therapeutic intervention, or know where to aim drug treatments.

Prof Marshall-Gradisnik explained it to IFLScience.

“The transient receptor potential melastatin subfamily 3 (TRPM3) is one of the most primitive receptors in the body. It’s activated by a wide variety of agents, from bacteria and viruses to temperature and environmental factors such as perfumes. This diversity made it a logical suspect for a condition like CFS that has so many different triggers in different people.

Marshall-Gradisnik compared TRPM3 receptors in natural killer cells in blood taken from 15 people with chronic fatigue syndrome and 25 healthy controls, finding that TRPM3 levels were much lower in those with CFS. TRPM3 is an ion channel, controlling the way calcium ions are transmitted between cells and carrying instructions in the process. In some circumstances, CFS patients’ cells showed much higher calcium ion flux, providing a possible explanation for CFS symptoms.

Prof Staines said in the same article that many drugs already exist that affect the functioning of different ion channels. TRPM3 receptors give researchers a place to start in the search for something that is effective, which could then be tested in human trials.

Potential drugs are already being used for other conditions which means there is good safety data on them so if they are found to work in the lab, clinical trials should be easier.

Devastation and risk from prescribed treatments
Frustratingly, but importantly, NCNED and the Queensland’s government’s media release emphasised that patients diagnosed with chronic fatigue syndrome and ME in Australia need to stop being treated as though they have a psychological illness.

“This discovery is great news for all people living with Chronic Fatigue Syndrome (CFS) and the related Myalgic Encephalomyelitis (ME), as it confirms what people with these conditions have long known – that it is a ‘real’ illness – not a psychological issue,” Queensland’s Science Minister, Leeanne Enoch, said.

“This is a much more debilitating illness than people have realised – people die from CFS/ME because they’re not taken seriously.

“The new research also suggests that [prescribing] exercise is just unbelievably bad as it can put the body under further stress.”

Christine Hunter, Alison Hunter‘s mother and founder of the Alison Hunter Foundation, was at an event with media and spoke about the ten years of devastating symptoms and said they felt like they’d been placed house arrest. Alison died in 1996 and her autopsy was released last year.

Griffith University is one of the few Australian institutions including people with severe ME in their research, making home visits to collect samples.

“Patients with the most severe form of the illness have been largely neglected by the health system and other researchers. We are absolutely dedicated to them and appreciate the suffering they have endured,” Prof Staines said.

Funding medical research in Australia
Funding is huge issue for ME and chronic fatigue syndrome in Australia. The federal government is only funding graded exercise/cognitive behavioural therapy but the state (Queensland) is supportive of this important work, providing $1.6 million since 2008 (reference). Three months ago, the Stafford Fox Foundation announced a $4 million dollar grant to NCNED. This funding is being used to commercialise a diagnostic test and develop potential treatments. The Stafford Fox Foundation previously awarded NCNED $2.5m so it shows that their investment in research is worthwhile. (figures)

“Grants and donations are critical to our work. Without this support we would not progress. Our donors can see the value of this work and how their donation is making a terrific difference.”

The estimated cost to the Australian community of CFS/ME diagnosis, treatment and management is more than $700 million annually. (figures) Emerge Australia estimates that is costs the Australian economy $4 billion a year.

“This illness costs the community and patients at all levels of health care diagnosis and management as well as the social and economic impact on patients,” Prof Staines said.

Last year Australia’s National Health and Medical Research Council (NHMRC) indicated that they were waiting on the USA to fund research. NHMRC CEO Prof Kelso said NIH’s announcements about research were excellent news because of the NIH’s budget and capability and would be an important stimulus for the field, potentially also for Australia, and ‘we hope for great things to come from that research’.

But why should Australia wait for other countries to fund research when there are up to 242,000 Australians with the illness and researchers who have expertise here?

“Australia leads the world in this field of research into CFS/ME. Blue sky second. We are very proud of our researchers and their achievements,” Prof Staines said.

Diagnostic testing
In the latest edition of the Solve MECFS Chronicle, ‘What, Exactly, Is A Biomarker? And Why Don’t We Have One?‘ explains what makes a ‘good’ biomarker and the biomarkers already established, such as spinal fluid, Natural Killer (NK) cells and MRIs. Australia’s Deakin University also announced immune response biomarkers last year.

Minister Enoch acknowledged that stopped patients from getting adequate care.

“CFS and ME are notoriously difficult to diagnose, with sufferers often going for years without getting the proper care and attention they need“.

Prof Staines said he expects their test to become a laboratory standard to give a certain, then trackable, diagnosis for chronic fatigue syndrome.

“Currently patients may be undergoing a range of tests to diagnose for CFS which incurs a significant cost to the health care system.

“This illness has traditionally been difficult to diagnose, meaning that people can go for months without getting the care and attention they require. We are confident that the new screening test currently in development will provide efficient and increasingly accurate screening for people with CFS.  This test may also be used to monitor and track the progression of their illness.”

Prof Staines said the development of this test is ongoing.

“Our research is constantly adding to the wealth of knowledge we have about this pathomechanism of this illness and its identification as a diagnostic test. We are applying technology never before used in this illness and which is continually being refined.”

A list of all Griffith University’s papers are published here. At the end of 2016 NCNED published a list of their achievements: 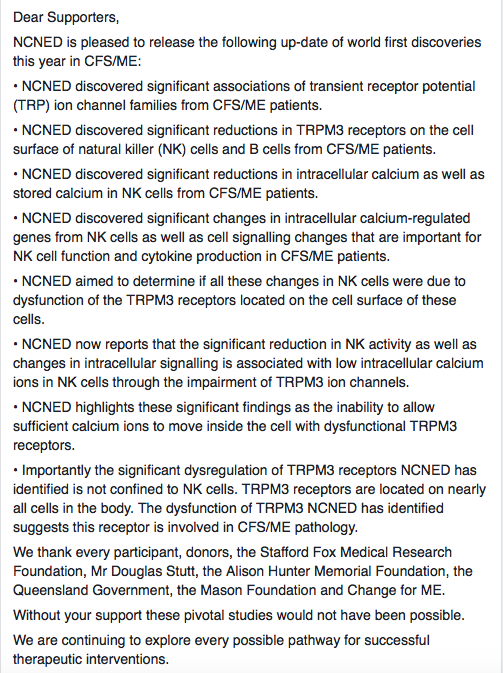