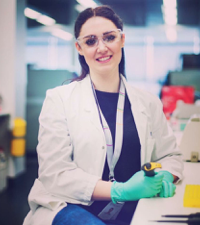 Rhiannon Morris is from Melbourne’s The Walter and Eliza Hall Institute of Medical Research (WEHI) which is the oldest research institute in Australia. While WEHI don’t directly research ME or CFS, their fields of research impact many diseases and contribute to scientific knowledge. Morris is working on the pathways involved in cytokine signaling which could potentially improve understanding of any and all diseases that are linked to cytokine signalling.

Relevance of cytokines: ‘In order to mount and coordinate an effective immune response, a mechanism by which lymphocytes, inflammatory cells and haematopoietic cells can communicate with each other is required’. Cytokines perform this function, according to the British Society for Immunology.

In 2015 Columbia University’s Drs Hornig and Lipkin discovered evidence of immunological dysfunction in ME/CFS (CCC) and diagnostic biomarkers for disease. The paper Distinct plasma immune signatures in ME/CFS are present early in the course of illness says “analyses based on disease duration revealed that early ME/CFS cases had a prominent activation of both pro- and anti-inflammatory cytokines as well as dissociation of intercytokine regulatory networks.”

“It appears that ME/CFS patients are flush with cytokines until around the three-year mark, at which point the immune system shows evidence of exhaustion and cytokine levels drop,” says Dr. Hornig. This is one example of why cytokine research is interesting.

Tell us about your role.
I am currently an honours student in the Molecular Medicine division at The Walter and Eliza Hall Institute of Medical Research. I am working in the Hilton lab with my two supervisors, Professor Doug Hilton and Dr. Andrew Jarratt along with numerous other researchers who are all very experienced and helpful. Next year I am hoping to continue my studies and undertake my PhD here at WEHI.

What has been the most exciting recent breakthrough to come out of WEHI?
I would have to say Venetoclax. Although it is probably not the most recent breakthrough it recently received approval from the US FDA, which is really exciting. The drug is based on work that was done at WEHI in the 1980s on Bcl-2 and it is being used to treat patients with chronic lymphocytic leukaemia.

What are you working on at the moment?
My project this year focuses on cytokine signaling via the JAK STAT signaling pathway with an emphasis on the interleukin 6 family of cytokines. I am essentially working on understanding the mechanisms and interactions behind the JAK STAT pathway starting from the moment a cytokine binds to a receptor down to the attenuation of that signal. It’s a really interesting project that has many aspects to it.

Columbia University and Australia’s Griffith University have found cytokines which are an immune signature, or biomarker, for different stages of chronic fatigue syndrome or ME (rather than using one of a few different, overlapping criteria which rely on other methods to diagnose). What illnesses/diseases does your work impact?
Cytokines are involved in many biological processes throughout the body, so there are a lot of diseases my work could potentially contribute to. I am looking at the JAK STAT pathway in detail, which has many implications in diseases such as myelodysplastic syndrome, cancers, immune dysfunction, improper immune signalling and responses. On a bigger scale, understanding the pathways involved in cytokine signaling could potentially improve our understanding of any and all diseases that are linked to cytokines and cytokine signaling.

Although you aren’t directly working on ME and CFS, do you think your work will have an effect on further research?
It is possible. A better understanding of the signaling mechanisms that I am studying means we can improve on ways to treat diseases that may be linked to cytokines. Often basic science is overlooked in favor of clinical and translational work, but a foundation and good understanding of biological processes is always going to be important in science.

This recent Australian study showed CFS patients’ brains deteriorating at an abnormal rate. Is new technology helping science catch up/see neurodegenerative disease where there was medical/community scepticism?
I think that advances in neuroimaging technology has made it permissible for researchers to see what is happening at the cellular level. Being able to understand the processes that lead to the neurodegeneration is key to knowing how we can manage or treat diseases. VBM as mentioned in that study is a really interesting technique that I think will be great for looking in to how the brain changes in patients with CFS.

Is Melbourne, and Australia, a good place to be a researcher?
Australia is definitely growing in terms of its contribution to the world of research and I think Melbourne is the place to be if you are in medical research within Australia. Where WEHI is located we are lucky to be surrounded by numerous hospitals, Melbourne University and other research institutes all of whom collaborate with one another, it’s a great biomed hub.

How can patients support research?
I think being aware of the medical research happening in Australia and around the world is the first step. The second is understanding the importance of medical research and supporting scientists. Patients can get involved and help by being part of clinical trials or providing data for scientists. Data from patients is always very useful for scientists because the more we know, the more we can improve.

Do you have much contact with patients, and if so, how has this affected you?
I personally do not, however within WEHI there are a lot of students and lab heads who are also clinicians and I think that working closely with patients is a really strong motivator for them in the lab.

Outside publishing papers, how do you think scientists should communicate about their work?
I think it’s important to try to communicate your work in a way that is digestible for the general public as well as other scientists. Communicating science to a broad audience is so easy now with social media. I use twitter regularly and I have met many scientists from around the world and had such interesting discussions with them. Twitter is one of many social media platforms that are valuable for both networking and communicating scientific research.

You’re taking the 366 papers challenge, reading a scientific paper every day, what are some of the most interesting and surprising things you’ve learned?
Although I have learned a lot from this experience, I probably wouldn’t recommend it to others, particularly those undertaking such an intense and short degree such as honours. I think that a paper a week is much more digestible. The most interesting papers I have read are those that were published before I was born. It’s incredible to think people made such big discoveries without all the technology we have today.

What is your view on open data? As a younger scientist, do you think there is generational change towards to open data?
Open data is a tricky one. In some ways it is a great idea, in others not so much. I do think that open data is useful and a great tool but I also believe that scientists using open data sources must absolutely acknowledge where that data was obtained. Hopefully we will see a shift in the future and see more data available to everybody. If we are all working towards a common goal, then why not share data?

What would you like to achieve in your career?
That is a really tough question as the answer changes depending on what stage of my career I am at. Currently I just hope to be able to start a PhD next year at WEHI and to get some good results that can contribute to our knowledge of cytokine signaling. Beyond that I hope to find somewhere outside Australia to do my post doc and one day come back with some new skills to put to good use.