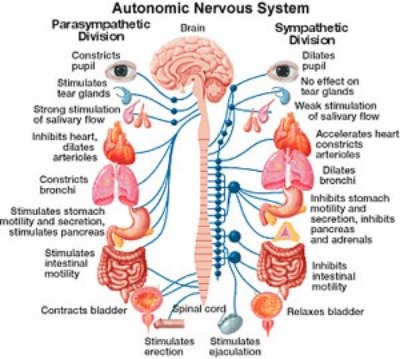 Australian researchers have found an abnormal centre in the brain which may explain problems with the signalling around the body in patients with ME.

South Australian and Queensland scientists examined 25 patients who met the 2012 ME International Consensus Criteria (although refer to it as chronic fatigue syndrome) and 25 controls in the paper ‘Autonomic correlations with MRI are abnormal in the brainstem vasomotor centre in Chronic Fatigue Syndrome‘, published in March 2016’s NeuroImage:Clinical.

The study showed the vasomotor centre, midbrain and hypothalamus correlations were abnormal in ME patients.

“The vasomotor centre and, through it, nuclei in the midbrain and hypothalamus play a key role in autonomic nervous system regulation of steady state blood pressure (BP) and heart rate (HR).

“We suggest that reciprocal connectivity between these regulatory nuclei is impaired, which in turn affects signalling to/from peripheral effectors/sensors.”

The authors say the study reveals patterns of abnormality that provide new insights into brain-body relationships in ME and are consistent with a nerve conduction deficit in the brainstem/midbrain.

This explains what our autonomic nervous system does:

Interestingly, MRI group comparisons between the patient group and controls detected no differences.

5 thoughts on “Brain connectivity problems causing signalling problems in ME”