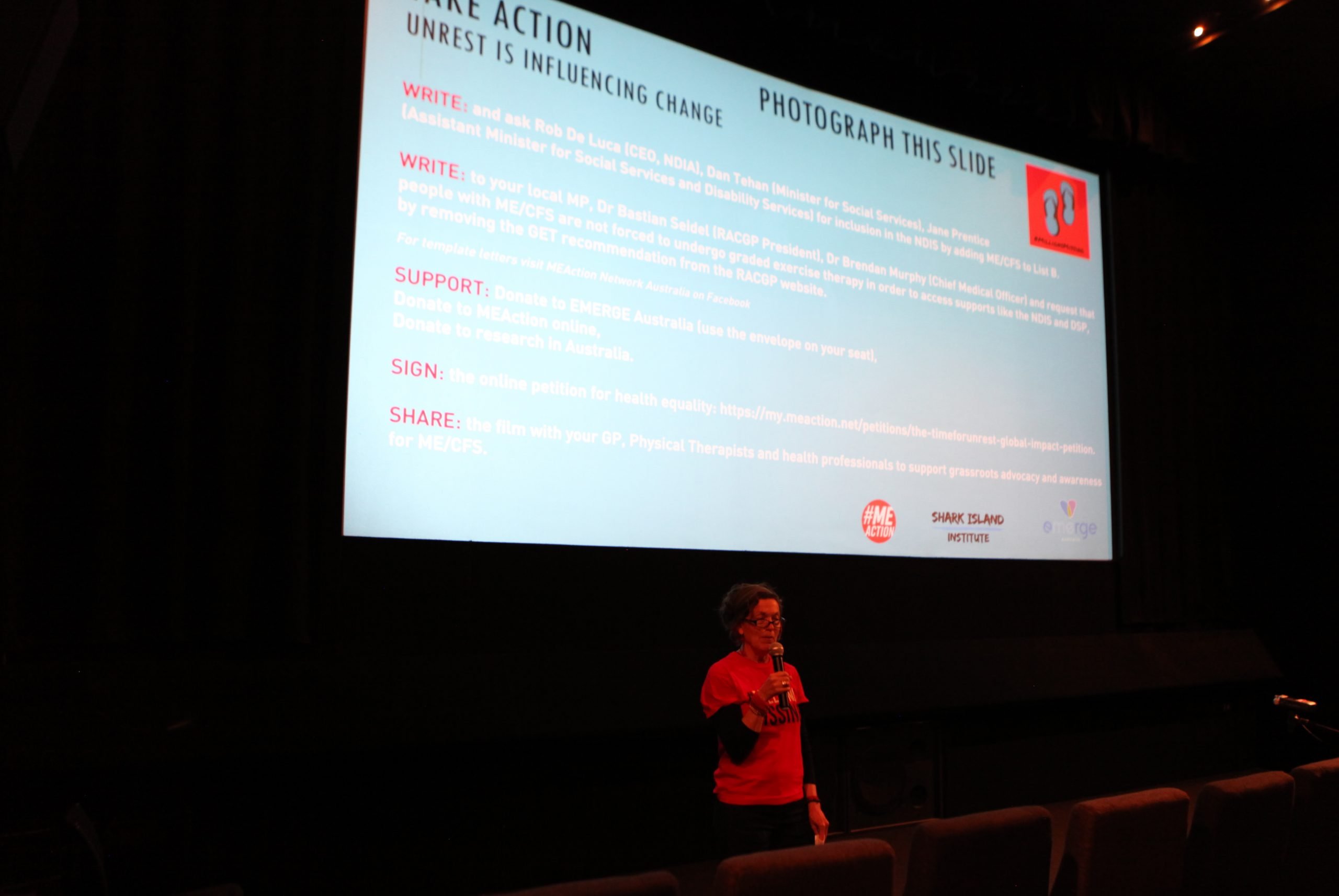 Sydney ME community members marked #MillionsMissing with a screening of the film ‘Unrest’ in Newtown, hosted by Shark Island Institute and people with ME: Barbara, Melody and Maya. The audience of around 110 people heard Barbara and Melody speak to their experience of ME, and what it has meant for them having the film to help bring a greater awareness of ME to the wider community.

Barbara has lived with ME since the early 90s, it took several years to get a diagnosis. During that time her body was harmed by exercise. In the years since, she has been housebound.

“This illness has an incredible range in the impact that has on people, and it is invisible,” said Barbara.

“People only see me when I’m well enough to be seen, and there are lots of times I am not well enough to interact with someone, to have a visitor, to talk on the phone. I was scared to watch this film when I saw the trailer, it brings up a lot of grief, but it was incredibly powerful to see my story told. Even though the people in the film are severely affected, it’s the story of all the millions of people around the world with this disease.”

Melody has been involved in community activism across many issues but has only been an activist for people with ME in the last couple of years.

“Everytime I watch this film something else floors me, this time everything floored me,” said Melody.

“What stands out for me today, is we are now finding a lot more hope with our community. We are finding our own stories now. For years it has been stories people are telling about us, now we are starting to say ‘hey this is our story’, and we’re also able to speak about the healthcare we need.”

Associate Professor Brett Lidbury, from the ANU Canberra, spoke following the film to the need for collaborative research and mentioned the exciting results from recent mitochondrial research performed by Professor Paul Fisher and the team at La Trobe University, with whom he collaborates. Other collaborative work is in the data analysis of samples from participants, and in the lab and with colleagues on Activin B as a potential serum biomarker.

“We collaborate widely, since we can’t be experts in every part of the body system. In the academic realm we become experts in narrow fields, which becomes more powerful when brought together,” said Assoc Prof Lidbury.

“We can’t do this in isolation, it requires everyone in all the other labs, it requires the clinicians, and the community. You are not invisible to me. We need all of you,” he added.

Melody closed the event by acknowledging the many people doing the work in advocacy that is resulting in the cultural change we are seeing happen. She finished by reading from the opinion piece by Scott Ludlum in The Guardian, “I know quite a few of us had tears this morning when we saw this (article) this morning, he ends by saying: None of this can happen too soon for those who have had to live with the isolation that such a punishing condition can impose. So when we light the place up blue on 12 May, it will be seen by more people than ever before. It’s one small way of saying to those who have waited so long for recognition and some hope of treatment: you’re not forgotten, you’re seen, and you’re dearly missed.”