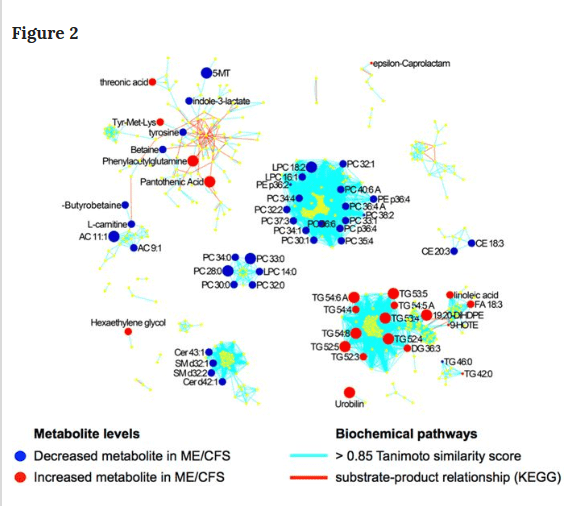 A new study published in the prestigous journal, Nature, examined the metabolism of people with ME and/or chronic fatigue syndrome and looked at irritable bowel syndrome (IBS), finding differences between patients and controls as well as patient subgroups with and without IBS. It also confirmed earlier metabolic studies.

The study, ‘Insights into myalgic encephalomyelitis/chronic fatigue syndrome phenotypes through comprehensive metabolomics’, looked into the pathogenesis (biological mechanism that leads to the disease state) of ME and/or CFS and subtypes in order to suggest pathways for the development of diagnostic and therapeutic strategies. (Metabolomics is a developing field that studies metabolism within a living system under varying conditions of stimuli. Phenotype is the set of observable characteristics, including appearance, development and behaviour.)

Scientists studied 50 people who met the Fukuda chronic fatigue syndrome (CFS) criteria and/or the Canadian Consensus Criteria (CCC) and 50 controls. The paper does not specify how many met the Fukuda CFS criteria, how many met the CCC or how many met both. There were 41 women and nine men in each group, reflecting that ME is four times more common in women than men. They studied people from four sites: New York, New York; Salt Lake City, Utah; Incline Village, Nevada; and Miami, Florida.

IBS co-morbidity was based on self-reported diagnosis on the medical history form. IBS was diagnosed in 24 of the 50 ME/CFS patients (48%).

“Our results are consistent with earlier reports that suggest that metabolites linked to lipid and energy metabolism are affected in ME/CFS. They extend earlier work by demonstrating that ME/CFS subjects with IBS co-morbidity have a distinct metabolomic profile compared to subjects without IBS and controls.”

Ceramide is a waxy lipid implicated in suppression of electron transport, insulin and leptin resistance and apoptosis (cell death).

Regarding severity, ceramides were associated with increased physical fatigue. 5-methylthioadenosine (a metabolite derived from S-adenosylmethionine as a by-product of polyamine biosynthesis that can be toxic to mammalian cells) was associated with functional impairment.

The study was done by the Center for Infection and Immunity, Columbia University Mailman School of Public Health, New York, USA. The lead author is Dr Dorottya Nagy-Szakal who completed her PhD in Hungary before doing post-doctoral studies in Texas, USA.  Scientists including Bateman, Klimas, Komaroff, Levine, Montoya, Petersen, Levin, Hornig and Lipkin, are listed amongst the 17 authors.

PrevPreviousResearch waste in ME and CFS trials
NextDid the petition stop the Xbox exercise trial?Next