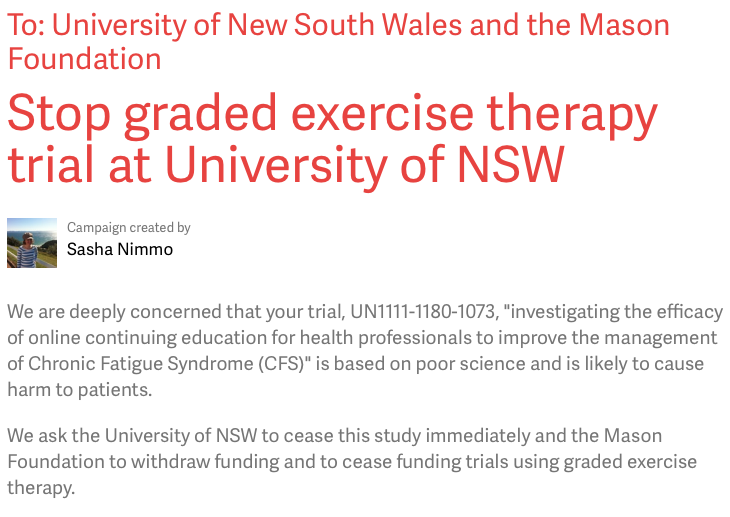 Australia’s University of New South Wales (UNSW) is trialling an education module for health professionals. The trial module treats chronic fatigue syndrome patients with graded exercise therapy and cognitive behaviour therapy (GET/CBT), despite the evidence showing these therapies have no benefit and may cause permanent harm.

If you object to this trial, sign the petition (update: the petition has now been sent, thank you for signing) or write to the University’s President and Vice Chancellor urgently. The petition will be submitted to the UNSW Vice Chancellor, the Mason Foundation and the Minister for Health in 10 days, along with a letter explaining why they University should not be conducting research based on the PACE trial.

An Australian patient asked for the PACE trial data and the analysis of it revealed neither CBT nor GET significantly increase recovery rates at 52-week follow-up.

It poses an international risk, as UNSW plan to “disseminate the treatment to other centers nationally and internationally”, according to information the University provided to the National Health and Medical Research Council.

The trial registration says “despite GET and CBT being widely acknowledged as best-practice interventions for CFS, the great majority of patients in Australia are not receiving these appropriate evidence-based interventions. Recent studies have demonstrated that the reason for this documented gap between research and practice is largely due to practicing health professionals lacking the knowledge and skills to provide appropriate care. ” It does not specify which “recent studies” and it is not true that it is “widely acknowledged as best-practice”.

Australian and overseas patient organisations, CFS and ME medical experts and science journalists have all raised the alarm about the use of GET/CBT:

“There is no good evidence to support the use of graded exercise therapy or cognitive behaviour therapy and there is important emerging evidence on genetic and immune markers for the condition, so we ask the Department of Health not to waste precious research dollars on those studies”.

“Australia shouldn’t be funding research into totally inappropriate exercise regimes or therapy, these remedies are actually counter-productive and dangerous”.

“A significant number of patients had been given advice on exercise and activity management that was judged harmful with symptoms becoming worse or much worse and leading to relapse.”

“Anyone who suggests that this might be fixed by exercise therapy should probably be de-registered I think”.

Reading patients’ reasons for signing the petition shows the negative impact of the trial.

SBS: The implosion of a breakthrough study on chronic fatigue syndrome

7 thoughts on “Petition: UNSW must not ignore evidence-based science”