How much can people with ME stand? 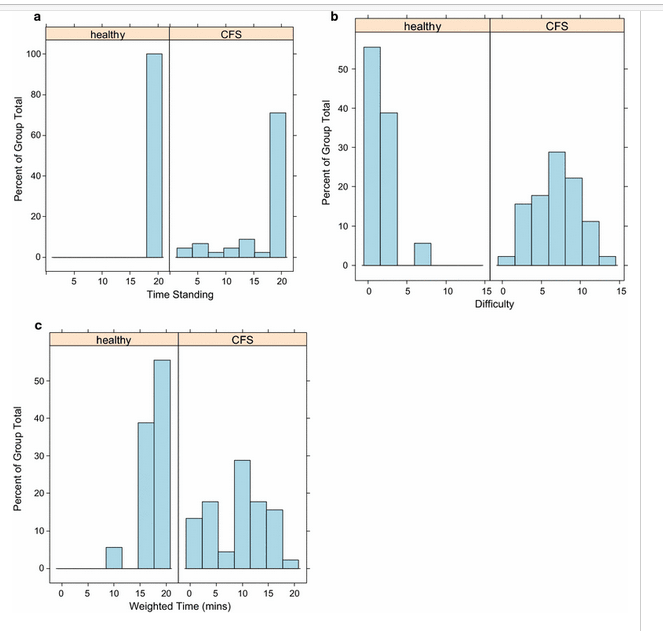 Australian researchers have literally measured how long people with Myalgic Encephalomyelitis can stand up. The study shows the length of time patients can stand up may be a useful measure of ME severity, and easy to do in clinical environments. The study also confirmed an earlier finding that Activin B is a potential biomarker for ME.

Scientists looked the weighted standing time (WST) as a measure of illness severity, by assessing orthostatic intolerance.  Orthostatic intolerance is where symptoms are made worse by upright posture and improve when lying down, including symptoms such as low blood pressure and increased heart rate.

Victoria’s CFS Discovery Clinic recruited 45 people with ME and 17 healthy controls between 2011 and 2013.  The Canadian Consensus Criteria was used, as the authors said “this study commenced just prior to the publication of the International Criteria; therefore, it continued with diagnosis by the Canadian Criteria for the project duration”. One of the authors of the paper, Dr Don Lewis, is an author of the Canadian and International Consensus Criteria.

Standing test method
The standing test is 20‐min standing task. Heart rate and pulse pressure were recorded at baseline, at 2‐min intervals poststanding, at the end of the task and following a recovery period. Average heart rate and pulse pressure variability were calculated from this data. Age, gender, length of illness and self‐reported fatigue scores were also recorded. POTS patients were diagnosed by an orthostatic increase in heart rate >30 beats per min, concomitant symptoms of orthostatic intolerance and no orthostatic hypotension. Differences in autonomic functioning between POTS and CFS patients were compared using independent samples t‐tests, whilst logistic and linear regressions were performed to examine the contribution of autonomic functioning to task completion and perceived fatigue, respectively.

The standing test included a subjective score of standing difficulty, assessing symptoms including pre-syncope (light-headedness and feeling faint) and pain.

The study grouped patients into three levels of severity: 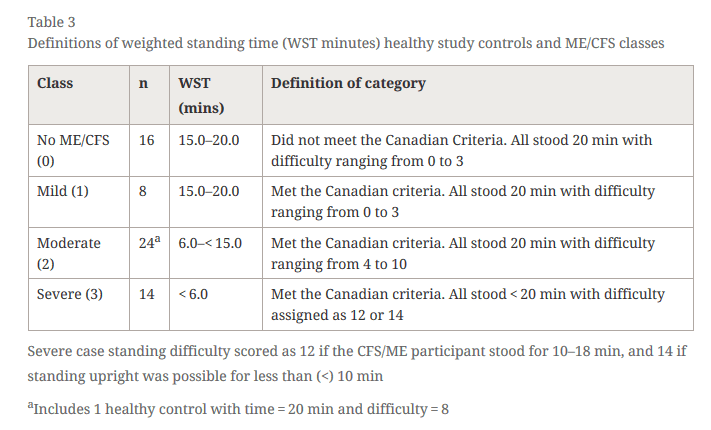 Potential biomarker
Lead author, Dr Alice Richardson from the Australian National University looked at pathology and cytokine markers including activins A and B, which are cytokines linked to inflammation. This follows work done by other the authors, which found Activin B is a potential biomarker for ME.  The lead author of the earlier study was Associate Professor Brett Lidbury, ANU.

“On direct comparison of ME/CFS to study controls, only serum activin B was significantly elevated, with no significant variation observed for a broad range of serum and urine markers, or other serum cytokines.”

Authors noted the study is limited by the sample size; small number of healthy controls and that the standing test can only be run once per patient because of the taxing nature of test but said ‘unpublished analysis from a separate cohort of healthy controls is incomplete at present, but thus far confirms the results in this paper’.

Funding for the work came from the Alison Hunter Memorial Foundation.

6 thoughts on “How much can people with ME stand?”