Looking for an excuse to eat chocolate? Griffith Uni may give you one. 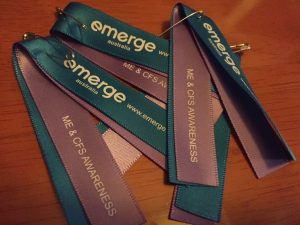 Australian researchers at Griffith University’s School of Medical Science and the National Centre for Neuroimmunology (NCNED) looked at 17 studies for evidence of diet modiﬁcation and nutritional supplements helping people with ME and chronic fatigue syndrome (CFS). Chocolate was one food studied.

“Improvements in fatigue were observed for nicotinamide adenine dinucleotide hydride (NADH), probiotics, high cocoa polyphenol rich chocolate, and a combination of NADH and coenzyme Q10,” the authors wrote but overall much more rigorous research is required.

“The conclusion of this review supports the current guidelines in that there is insufﬁcient evidence for the use of nutritional supplements and elimination and modiﬁed diets with respect to relieving CFS/ME symptoms.”

The systematic review is the first study from NCNED in 2017: Campagnolo N, Johnston S, Collatz A, Staines D, Marshall-Gradisnik S: Dietary and nutrition interventions for the therapeutic treatment of chronic fatigue syndrome/myalgic encephalomyelitis: a systematic review. Journal of Human Nutrition and Dietetics 2017

All the studies reviewed had fewer than 40 subjects and even fewer in the control groups (if they had one at all). None of the trials asked participants to record what they ate. Only six of the studies recorded the duration of illness. The study of chocolate only had 10 participants, no controls and used the self-reported Chalder Fatigue scale.

Fatigue was the primary outcome measured in the studies. Secondary outcomes were quality of life, physical activity and psychological wellbeing. Studies were excluded if they combined patients with other illnesses, including fibromyalgia for example.

“Common criticisms of this case deﬁnition include a combination of broad nonspeciﬁc symptoms, thus being less likely to identify a homogeneous patient population. This may have contributed to a lack of sensitivity of the studies in this review to detect a beneﬁcial effect of the nutritional treatment. Therefore, it is recommended that future research should employ more speciﬁc CFS/ME criteria to classify subgroups with similar symptoms and/or severity to identify those patients who may beneﬁt from therapeutic nutrition treatment and counselling.”

The study notes that around half of people with ME and CFS report food intolerances and beneﬁt from dietary modiﬁcation.

This systematic review highlights the lack of large, meaningful studies into ME and CFS.

If you would like to reproduce this article please contact nimmosasha@gmail.com. Article not to be reproduced without permission. For updates, follow @sashanimmo on Twitter.
PrevPreviousAustralia’s medical research council promises ‘serious exploration’ of research for ME within months
NextJulia BrowellNext

3 thoughts on “Looking for an excuse to eat chocolate? Griffith Uni may give you one.”