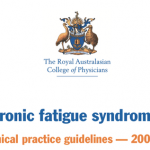 Australians with Myalgic Encephalomyelitis and chronic fatigue syndrome are having their disability support pension, NDIS, superannuation and other requests for help denied due to the current Australian chronic fatigue syndrome guidelines, published back in 2002.  Myalgic Encephalomyelitis affects between 0.4 and 1 per cent of the population, including children, and one quarter are bed bound or housebound.

Chronic fatigue syndrome is an ‘umbrella’ term and is often a diagnosis given when doctors cannot find another answer. ME and chronic fatigue syndrome are not the same and shouldn’t be used interchangeably. As the 2012 ME International Consensus Primer states, “misperceptions have arisen because the name ‘CFS’ and its hybrids ME/CFS, CFS/ME and CFS/CF have been used for widely diverse conditions.” CF, or chronic fatigue, is a symptom of many illnesses so it is an unhelpful description.

Unfortunately, Australian GPs often get it wrong and Queensland researchers found that only a third of those diagnosed with CFS have ME. Another third don’t even meet the broad US CFS criteria (Fukuda). People misdiagnosed with chronic fatigue syndrome often have serious, treatable conditions so correct diagnosis is hugely important for everyone.

The stigma associated with chronic fatigue syndrome has meant that ME is not taken seriously as a disabling disease. Not everyone who has ME is disabled but 25% of people with ME are so severely affected they cannot leave home or bed.

A 2015 Danish study of people with ME found the population was “more disabled and socially marginalised than the average population with regard to the subjects of long-term illness, number of illnesses, proportion of disability pensioners and relationships.” Evaluating data on the quality of life, the researchers found people with ME “have the lowest, measured health-related quality of life of 20 conditions, thus even worse than multiple sclerosis and stroke.”

The Australian guidelines fail to recognise the seriousness of ME and people who are mostly bed bound, suffer severely debilitating and painful symptoms and can’t care for themselves are left without any helpful treatments. The Australian government guidelines give recommendations for graded exercise therapy, as if people are merely unfit. The ME Association found that graded exercise therapy made 78% of respondents worse, often reducing people’s level of functioning permanently.

Back in the 1990s, the federal government saw a need and commissioned guidelines on diagnosis and treatment. In 2002 the Australian chronic fatigue syndrome clinical guidelines were published after being commissioned by the National Health and Medical Research Council (nine years after the process started). They were heavily criticised for having a bias towards the psychological, dismissing biological evidence and omitting severely affected patients. Within weeks of their publication, the Australian Senate called for their immediate review, noting the guidelines were both inadequate and failed to reflect the consultation process.

Compared to the International Consensus Primer on ME for Medical Practitioners, the Australian guidelines fail to take patients concerns seriously; deny it is a ‘disease’; state it is on the ‘spectrum of fatigue’ and that there are ‘no abnormal findings’. The guidelines recommend cognitive behavioural therapy to “identify beliefs which beliefs, attitudes and behaviours holding back recovery” and many more troubling statements.

The National Health and Medical Research Commission (NHMRC) looks after all the clinical guidelines, and according to its own ‘Meeting Clinical Practice Guidelines’, all guidelines are meant to be reviewed every five years.

The NHMRC are currently considering a report from their ME and CFS advisory committee on the need for new guidelines. The Royal Australasian College of Physicians (RACP), authors of the current guidelines, advised it is awaiting the CEO’s consideration of the report and that it did not make a submission as the chair of the committee, Prof Kwun Fong, is a RACP member.

The guidelines are also intended to be replaced every 10 years, which means the Australian CFS guidelines should have been replaced seven years ago, in 2012.

Why didn’t we get new guidelines 7 years ago?

In 2012 Emerge Australia (then ME/CFS Australia (Victoria, Tas & NT)) committed to updating the guidelines, based on the then-new Myalgic Encephalomyelitis International Consensus Criteria. Emerge was given two years to deliver new clinical guidelines to the government.

In 2012 Alison Copely was the CEO of ME/CFS Australia (Victoria, Tas & NT), this was during the time Simon Molesworth was stepping down as President. Molesworth was strong in his letters to the authors about the failures of the 2002 Australian CFS guidelines, saying they would result in “the promotion of widespread misconceptions about the illness, inappropriate and inadequate medical care and further cases of misdiagnosis with potentially far-reaching and long-lasting, adverse effects.” Would he have imagined in 2002 how long-lasting these adverse effects would be, seventeen years later?

ME/CFS Australia (Victoria, Tas & NT) advocated for the use of ‘Myalgic Encephalomyelitis’ instead of ME/CFS as Copely told Vogue magazine (April 2012) “the term myalgic encephalomyelitis better describes the condition” and soon after the organisation changed their name to ‘Emerge’ to include the letters ‘ME’.

In 2013 the NHMRC met with Emerge to discuss updating the Guidelines. They were due in 2014, according to information NHMRC published on its website. When ME Australia queried where the new guidelines were, NHMRC advised updated guidelines were not provided and referred queries to Emerge.

How has it affected people?

Stories from people across Australia show the impact that these guidelines are having on their life and ability to get pensions, disability support, insurance and access to their own superannuation.

“I missed out on permanent disability insurance from my superannuation, as I got wrong advice from all the doctors who thought ME was only temporary.”

Urged to do treatment that would worsen health

“I was told to get support from the Government, I had to go to the UNSW Clinic and undertake graded exercise therapy (GET) in order to prove I couldn’t get better.”

“I’ve been rejected twice by the NDIS as I am not ‘disabled enough’ even though I’m housebound due to orthostatic intolerance and require personal care and home help. Insurance for Total and Permanent Disability (TPD) was also rejected. So disheartening.”

Mistreatment in the workplace

“Due to existing medical guidelines, I was denied reasonable adjustment by my workplace and threatened with assessment by external medical assessor. I was forced to work during my worst period of illness. Thankfully my GP believed me and could take a month off on leave. I ended up needing the union to represent me. All I wanted was to work two days from home, which is normally a manager’s decision. The Human Resource (HR) person’s own medical bias and bigotry came into play big time; asking about my personal treatment (eg GET, CBT) and that I should be on the ‘return to work’ policy as the HR person expected me to improve.

It was stressful as the external medical assessor could have denied me reasonable adjustment which would have made working impossible.

It definitely led to worsened health. It lowered my baseline of health; I’m absolutely certain that if I’d been permitted reasonable adjustments immediately, I’d have been healthier now and going on. This poor treatment led to my being suicidal, with people checking in on me while I was on the month of sick leave. I felt trapped, demoralised, infantilised, disbelieved.”

How has it affected you? Email ME Australia or leave a comment below.

Medical Board of Australia. 2014. Good medical practice: A code of conduct for doctors in Australia.

Centers for Disease Control and Prevention, 2018. Treatment of ME/CFS.

PrevPreviousTeenagers with ME and CFS use same amount of energy to think as healthy kids
NextMeet the Scientists: Chelsea Bartlett and ACU teamNext