Mistakes of the past: ‘The Pathogenesis of Melancholia’ and other wasted money. 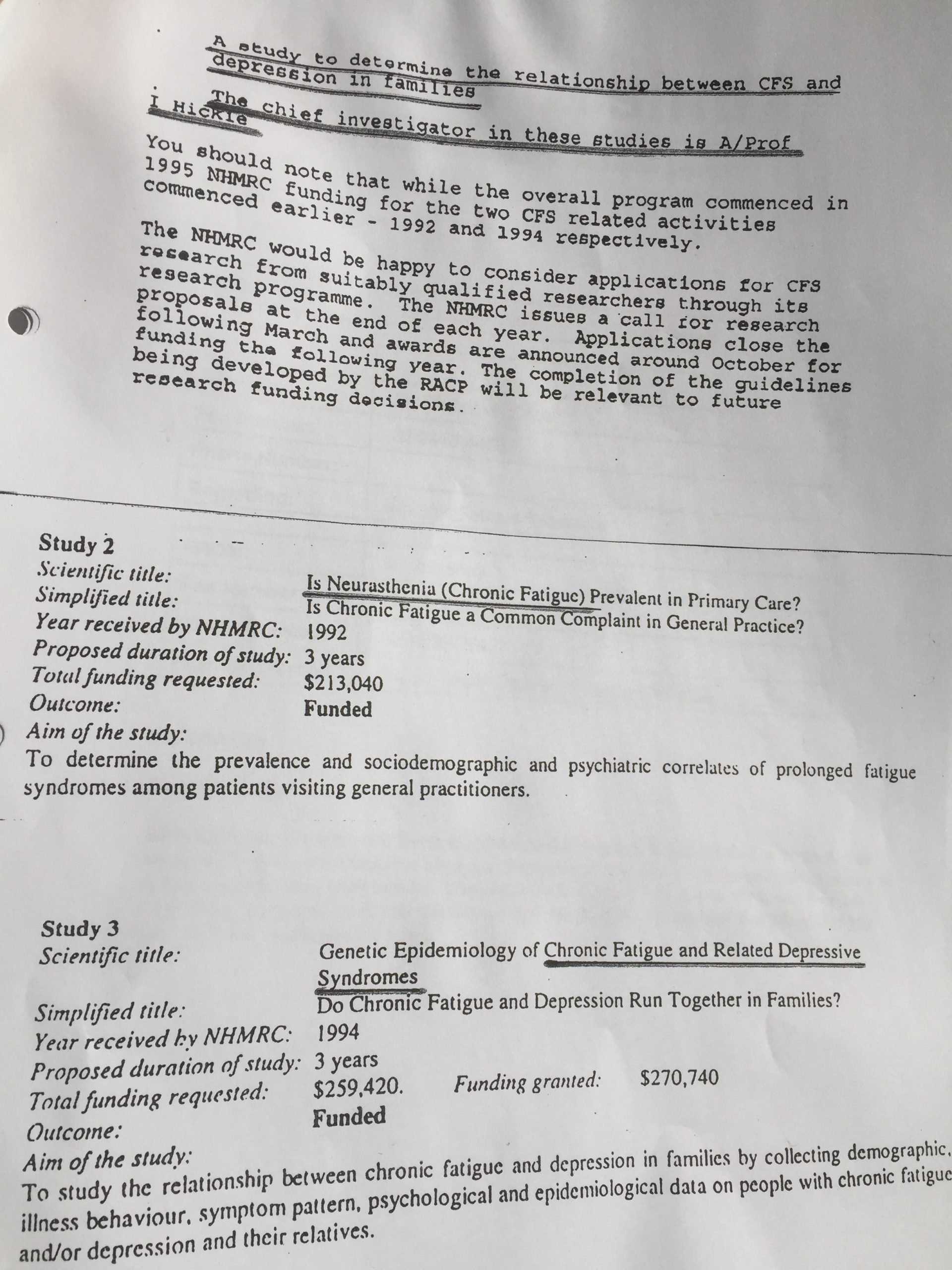 Australia’s government is seeking advice from an advisory committee on current research, gaps in research and whether the 2002 clinical guidelines for doctors should be revised. The last time the government began to look at chronic fatigue syndrome was 25 years ago. In 1993 the then Minister for Health, Graham Richardson, established a review to provide advice on diagnostic and management regimes for sufferers of CFS. Nine years later the 2002 guidelines were published; but never endorsed by patient organisations.

During the 1990’s Australia’s federal government spent almost a million dollars on research into chronic fatigue syndrome. It all went to psychiatrist Ian Hickie who worked at the University of New South Wales (UNSW).

1992 saw Hickie given $213,000 for the study ‘Is neurasthenia (chronic fatigue) prevalent in primary care?’.  The aim of the study was to “determine the prevalence and sociodemographic and psychiatric correlates of prolonged fatigue syndrome among patients visiting general practitioners”.

In 1994 Hickie was granted $271,000 for the study ‘Do Chronic Fatigue and Depression Run Together in Families’, collecting data on “people with chronic fatigue and/or depression and their relatives”.

In 1996 the NHMRC provided almost half a million dollars for research into chronic fatigue syndrome. The funding was again given to the UNSW to analyse the ‘Pathogenesis of Melancholia’. The chief investigator was Ian Hickie (according to a fax from the Department of Health and Family Services 1996).

1993 The ‘Watson’ Chronic Fatigue Syndrome Review, instigated by the federal health minister, recommended a national consensus conference of key agencies, researchers, clinicians and representative consumers. This recommendation was not followed.

1995   The RACGP proposed the development of clinical practice guidelines for CFS.

1996   The Commonwealth Department of Health and Aged Care provided a grant of  $130,000 (later extended to $200,000) to the RACP. The RACP committed to following procedures outlined in the National Health and Medical Research Council Guidelines for the Development and Implementation of Clinicial Practice Guidelines.

1998   Due date for the release of CFS Clinical Guidelines (a draft was released for comment and attracted widespread comment).

2002   The CFS Clinical Guidelines were published.  The Guidelines were strenuously rejected by all state consumer societies and the ME Chronic Fatigue Syndrome Association of Australia. Many Australian and international researchers voiced concerned about the bias of the document.

Hickie went to become an author of the 2002 CFS guidelines, along with his UNSW colleague, Andrew Lloyd.

They worked together on ‘A prospective study of the psychiatric & medical characteristics of post-infective fatigue & chronic fatigue syndrome’, from 2001-2005 and the NHMRC funded the $500,000 study.

The Guidelines say “a multidisciplinary Working Group (including a Consumer Health Forum representative) was established under the auspices of the RACP to develop and disseminate evidence-based guidelines, following the procedures recommended by the NHMRC.

“The Working Group conducted an extensive review of the relevant scientific literature on prolonged fatigue, chronic fatigue and CFS, and the evidence was rated according to a modification of the schema recommended by the NHMRC.”

These guidelines state they are for health care professionals “involved in managing people with fatigue states”.

Two written complaints about the 2002 Australian criteria, here and here, say the 2002 Guidelines would result in misdiagnosis, inappropriate and inadequate medical care and the promotion of widespread misconceptions about the illness.

This history shows the importance of the current ME and CFS advisory committee, listening to patients and experts. This could dictate treatment for the next 25 years and has the potential to either continue to misdirect funding to psychological and exercise programs or to invest in biomedical research and find a treatment which would transform the lives of hundreds of thousands of lives in Australia.

Thank you to Christine Hunter AM from the Alison Hunter Memorial Foundation for contributing information.

4 thoughts on “Mistakes of the past: ‘The Pathogenesis of Melancholia’ and other wasted money.”